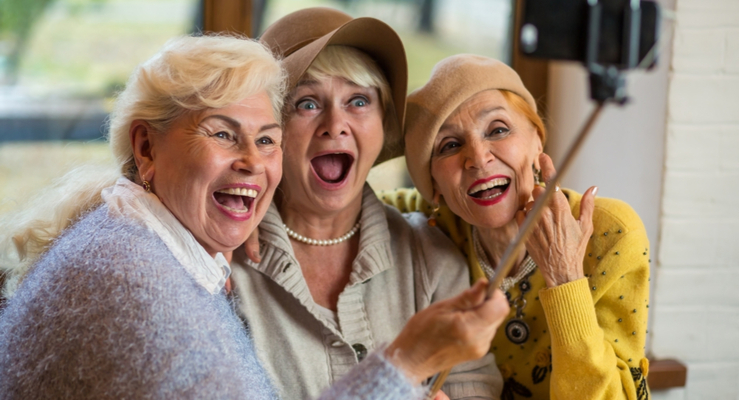 Friends – it’s not just a classic TV show where a gaggle of thirty-year-olds all marry each other, sip coffee and complain. No, friendship is also the most fundamental relationship any healthy human being can hope to nurture and develop. There’s a reason that ancient humans suddenly decided to dismantle their tents, emerge from their caves and create Babylon ten thousand years ago. That reason? The absolutely awesome power of Friendship. Without friendship, there’d be no buddy cop movies.

We can’t fathom the horror of living in a world without Starsky and Hutch. Who would’ve thought two men could bond so easily over a shared love of octane-pumping car chases and high-waisted denim jeans? But how does friendship benefit us? We can think of a few ways.

Like a bad cold or a hearty laugh, happiness can spread among people like wildfire. In fact, a recent medical study quantified exactly how contagious happiness can be.

A Harvard Medical School study of 5,000 people over 20 years found that one person’s happiness spreads through their social group even up to three degrees of separation, and that the effect lasts as long as a year. On the flip side, sadness isn’t as contagious: While having a friend who’s happy improves your likelihood of being happy by 15 percent, having one who’s unhappy lowers your chances by just 7 percent.

Just look at those percentages! Not only that, but people who have large and well connected social circles are 40% happier than those without. Just knowing this stuff increases our comfort levels by 200% at least.

Is there a better confidence booster than the mere presence of a friend? Whether it be summoning the courage to sit through a particularly scary movie, or jumping out of an airplane, friends help us just by being there. A recent study has found as much:

In a particularly clever demonstration of the rewards of friendship, participants in this study stood in front of a hill, either alone or alongside a friend, and estimated how steep it seemed. With a friend at their side, they thought the hill was less steep. In another variation, all participants stood alone but some were asked to think about a friend. Merely bringing a friend to mind again made the climb seem less daunting.

It’s just like Tammi Terrell and Marvin Gaye sang about all those years ago.

We won’t knock small talk, it’s necessary social fuel. We need small talk to get to know the people around us. While that’s all well and good, sometimes you have to cut the malarkey and get right to the big questions. Questions like: What is the meaning of life? Are aliens real? Who really built Stonehenge?

It’s important that these big topics are discussed, according to a scientific study:

…People with the highest levels of well-being have more “substantive” conversations than small talk, according to a 2010 study in Psychological Science.

Next time a newfound friend opens up a big conversational can of worms, don’t shy away. Indulge! You’ll find your well-being increase like the dickens!

4. Friends can improve our health and longevity.

If we haven’t yet sold you on the truly incredible power of friendship, we’ve got one last whopper for you. You see, friendship doesn’t just enhance our life quality – it extends it.

Women who have at least one confidant survive longer after surgery for breast cancer, for example. And a review of 148 studies found that people with stronger social relationships have a 50 percent lower risk of mortality.

The implications of this are frankly staggering. Given that medical technology is advancing at an unprecedented rate, people are living longer and longer. But sprinkle healthy friendships into that mix? Frankly, at some point in the next fifty years, people could potentially live to be one hundred and twenty-five! That’s a lot of candles! With all the friends you’d have celebrating with you, surely the cake would be large enough to hold them.

These are just four of the nearly infinite ways that solid, healthy friendships improve our lives. If you’ve been slacking in the friend department, maybe now’s the time to get back out there and find some people who you can bond with over mutual interests. Reusable Bottles, Rewards Points and Sticking to Your Grocery List are Just a Few Ways to Save Money…Read on for More! The Many Facets of Being Happy! Tips for a Happy Retirement