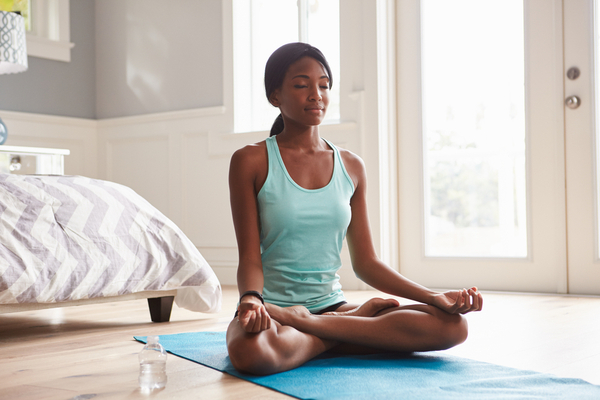 Meditation – it’s older than sliced bread, horse carriages, and even the Roman empire. We still don’t fully understand the mechanics of meditation or why it works the way it does. What we do understand (after years of scientific study) is that meditation is supremely beneficial for our overall well being. The benefits of meditation range from disease/pain management, to sleep, to emotional control. You name a woe, meditation probably soothes that woe. But which woes, exactly, doth it soothe? Let us list the ways for thee.

1. It Reduces Stress and Anxiety

Ahh yes, stress and anxiety. Has there ever been a more gruesome duo to torment the unwitting public? There are more things to worry about in this current day and age than there were even twenty years ago. You may find yourself beset by stress on all sides, looking for ways to soothe a noisy mind. Look no further! Meditation, it seems, is the way.

According to a study done at UC Davis:

This is the first study to show a direct relation between resting cortisol and scores on any type of mindfulness scale,” said Tonya Jacobs, a postdoctoral researcher at the UC Davis Center for Mind and Brain and first author of a paper describing the work, published this week in the journal Health Psychology…At an individual level, there was a correlation between a high score for mindfulness and a low score in cortisol both before and after the retreat. Individuals whose mindfulness score increased after the retreat showed a decrease in cortisol.

Cortisol, it should be noted, is the hormone most directly related to stress levels. It wreaks havoc on your nervous system in general. Good to know that just sitting for ten minutes a day, non-judgmentally aware of the present moment, can greatly reduce your cortisol levels and in turn, your stress

What if we told you that there was a way to reduce your blood pressure without having to move an inch? Hold those scoffs and tongue clucks! Not only is it plausible – it’s proven to work.

A study of 996 volunteers found that when they meditated by concentrating on a “silent mantra” — a repeated, non-vocalized word — reduced blood pressure by about five points, on average…A review concluded that several types of meditation produced similar improvements in blood pressure…In part, meditation appears to control blood pressure by relaxing the nerve signals that coordinate heart function, tension in blood vessels and the “fight-or-flight” response that increases alertness in stressful situations.

If you’ve struggled with high blood pressure in the past, or are currently struggling with it, you know that a five-point reduction is no joke. Not only will you feel better, but you’ll get your doctor off your back to boot, no apples needed. That’s a win-win in our books.

There’s that joke that you see sometimes on dream boards and in greeting cards:  “They told me when I got older I’d lose my mind, what they didn’t say is that I wouldn’t miss it very much!”This joke covers a somewhat disquieting truth: our memories get fuzzier as we age. As we get older, the brain loses its elasticity. It hardens like old gum on the sidewalk. It doesn’t have to though. There are ways to maintain your cognitive powers well into your hundreds.

Kirtan Kriya is a method of meditation that combines a mantra or chant with repetitive motion of the fingers to focus thoughts. It improved participants’ ability to perform memory tasks in multiple studies of age-related memory loss. Furthermore, a review of 12 studies found that multiple meditation styles increased attention, memory and mental quickness in older volunteers. In addition to fighting normal age-related memory loss, meditation can at least partially improve memory in patients with dementia. It can also help control stress and improve coping in those caring for family members with dementia.

“What the world needs now is love, sweet love.”


It was true when Burt Bacharach said it all those years ago, and it’s still true today. Failures of empathy are sometimes pathological, that’s certain. But often times our own small failures of empathy happen because we’re so dang worn out. We’ve spent our resources. We need to refocus on the things that truly matter. There’s a form of meditation, called Metta meditation, that purports to increase your empathy levels.

Twenty-two studies of this form of meditation have demonstrated its ability to increase peoples’ compassion toward themselves and others. One study of 100 adults randomly assigned to a program that included loving-kindness meditation found that these benefits were dose-dependent. In other words, the more effort people put into Metta meditation, the more positive feelings they experienced. Another group of studies showed the positive feelings people develop through Metta meditation can improve social anxiety, reduce marriage conflict and help anger management.

If you’ve ever found yourself wishing you could more easily express the deep well of compassion you feel for those around you, Metta meditation might be just what you need.

From where does creativity spring? Surely it is a mystery, baffling scientists, poets, philosophers, politicians, authors, gardeners, figure skaters, doctors, clowns, and clown-doctors alike. Perhaps it will remain a mystery until the end of time. We do know that meditation enhances creativity, probably in the same way a filter cleans out a fish tank.

Open-monitoring meditation (observing and noting phenomena in the present moment and keeping attention flexible and unrestricted) was far more effective in stimulating divergent thinking, a key driver of creativity.

Before you get cracking on your magnum opus, maybe squat down there and do some mental push-ups. Not that meditation is necessarily comparable to mental push-ups – though you will get better at it with practice, like with push-ups.

What we’re saying is, meditation is a fine way to warm up the old creativity soup that’s sloshing away in your brain, waiting to be accessed and transformed into expressive art.

Don’t want to take our word for it? Here’s Director David Lynch talking about the effect of meditation on his process.


If that doesn’t convince you, nothing will! Some Interesting Facts You May Not Know About Your Eyes